Dominican Trail from Ohio to Texas

In 1874, Bishop Rosecrans of Columbus, Ohio, named Sister Mary Agnes Magevney of Memphis, Tennessee, Superioress of the house to open the Cathedral School of the Sacred Heart in Columbus, along with assistance from Mother Rose Lynch. Both were members of the Dominican Congregation of St. Mary of the Springs in Columbus, a daughter community of the original American foundation, St. Catharine, Kentucky (1822). 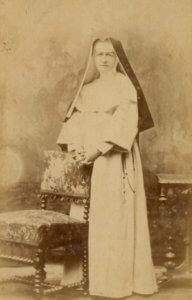 Mother Mary Agnes Magevney poses for her portrait while visiting her family in Memphis, Tennessee.

When Bishop Rosecrans died, the Cathedral School in Columbus closed due to lack of finances, and Mother Mary Agnes arranged to relocate in Somerset, Ohio, opening Sacred Heart School there in May 1879. Bishop John Watterson did not want two motherhouses so close, so Mother Agnes asked for and received from Bishop Nicholas Gallagher admission into the Diocese of Galveston, Texas, the mother diocese of the state.

Leaving Somerset on September 26, 1882, a group of twenty sisters arrived in Galveston by train on September 29 (our Founders’ Day). The sisters immediately opened Sacred Heart Academy in Galveston, thus beginning their ministry in education. By 1891, the year of Mother Agnes’ death, 26 women had joined the congregation and had begun to earn the reputation as pioneers in education. In June 1902, the community received formal affiliation with the Dominican order, also known as the Order of Preachers. Mother Pauline Gannon, the second prioress, insisted that each teacher be state certified and hold a university degree, expanding the sisters’ reputation in education.

During Mother Pauline’s thirty-year administration, the community grew to 115 members.  In 1905, Mother Gannon and the Dominican Sisters founded St. Agnes Academy for young women.  In 1918, the sisters opened Newman Hall as a residence for women attending the University of Texas in Austin. In 1925, the congregation broke ground for a new motherhouse at 6501 Almeda Road, in Houston, relocating partly due to the disastrous 1900 Galveston Storm that took 6000 lives. In 1943, the Houston Dominican’s status changed from a diocesan to a papal congregation.

In 1945, the congregation founded Sacred Heart Dominican College (later Dominican College) and operated the college on the motherhouse grounds until its closing in 1974. Many of the Dominican Sisters earned their degrees and teacher certification there. Following the close of the college, the Diocese of Galveston-Houston bought the land and college buildings.

During the 1940s, the Dominican Sisters of Houston provided leadership for the organization and accreditation of the diocesan school system, the Montessori method, and Project Head Start. In 1956, the sisters founded St. Pius X High School, a co-educational Catholic college preparatory school. 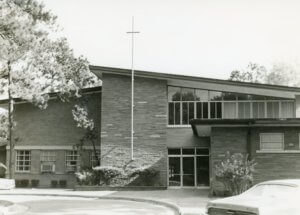 Following the Second Vatican Council, the sisters began ministry in areas other than schools, such as parish religious education, campus ministry, and social work. In 1966, the congregation responded to Pope John XXIII’s call for missionaries in Central and South America and traveled to minister in Guatemala.  Since 1984, the sisters have sponsored San Vicente de Paul Bethania School in one of the poorest neighborhoods in Guatemala City. 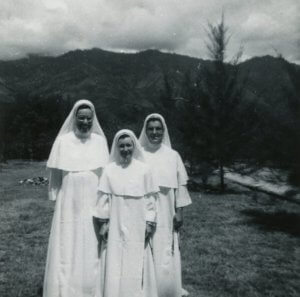 Dominican Sisters of Houston protest School of the Americas.